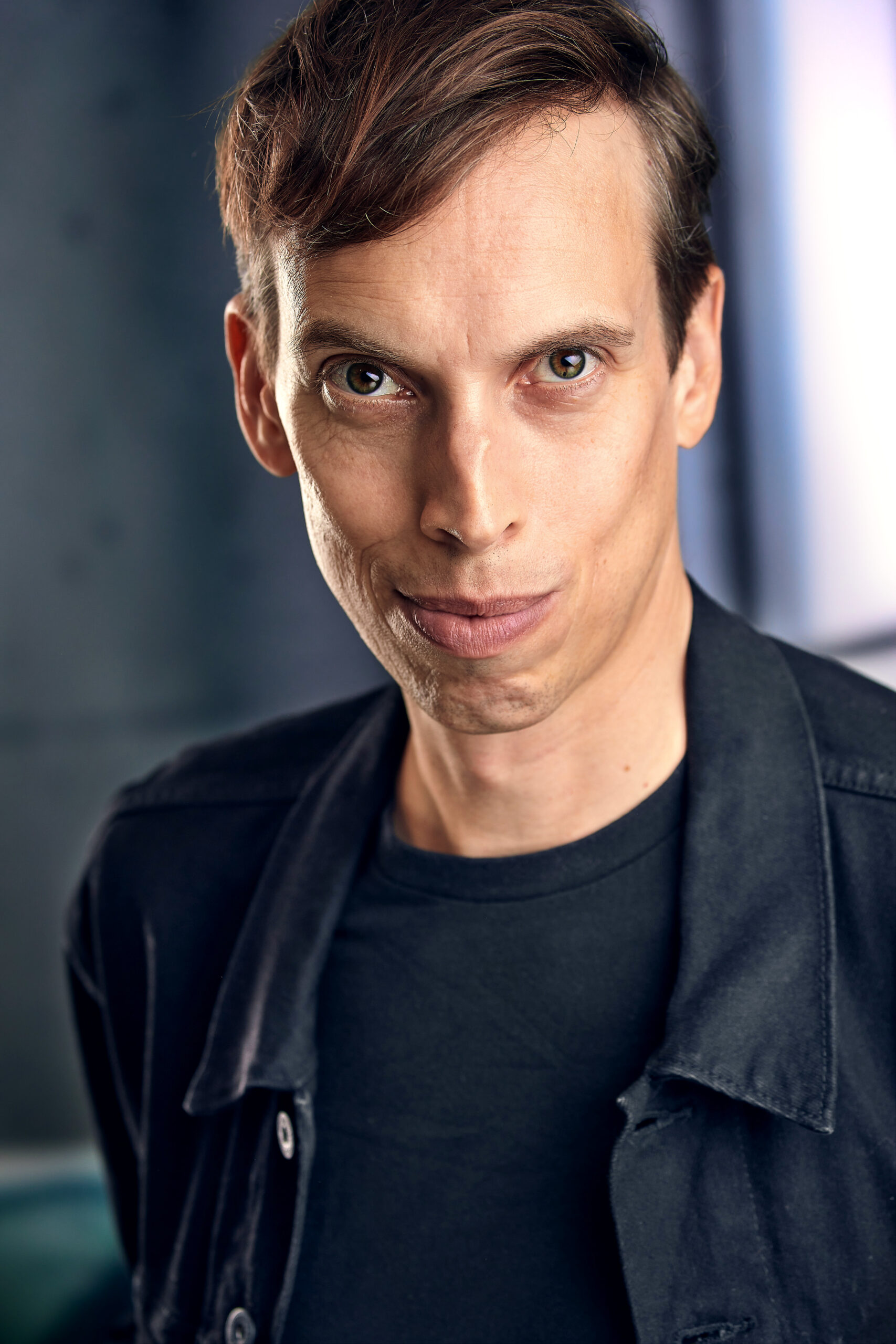 View him on IMDb 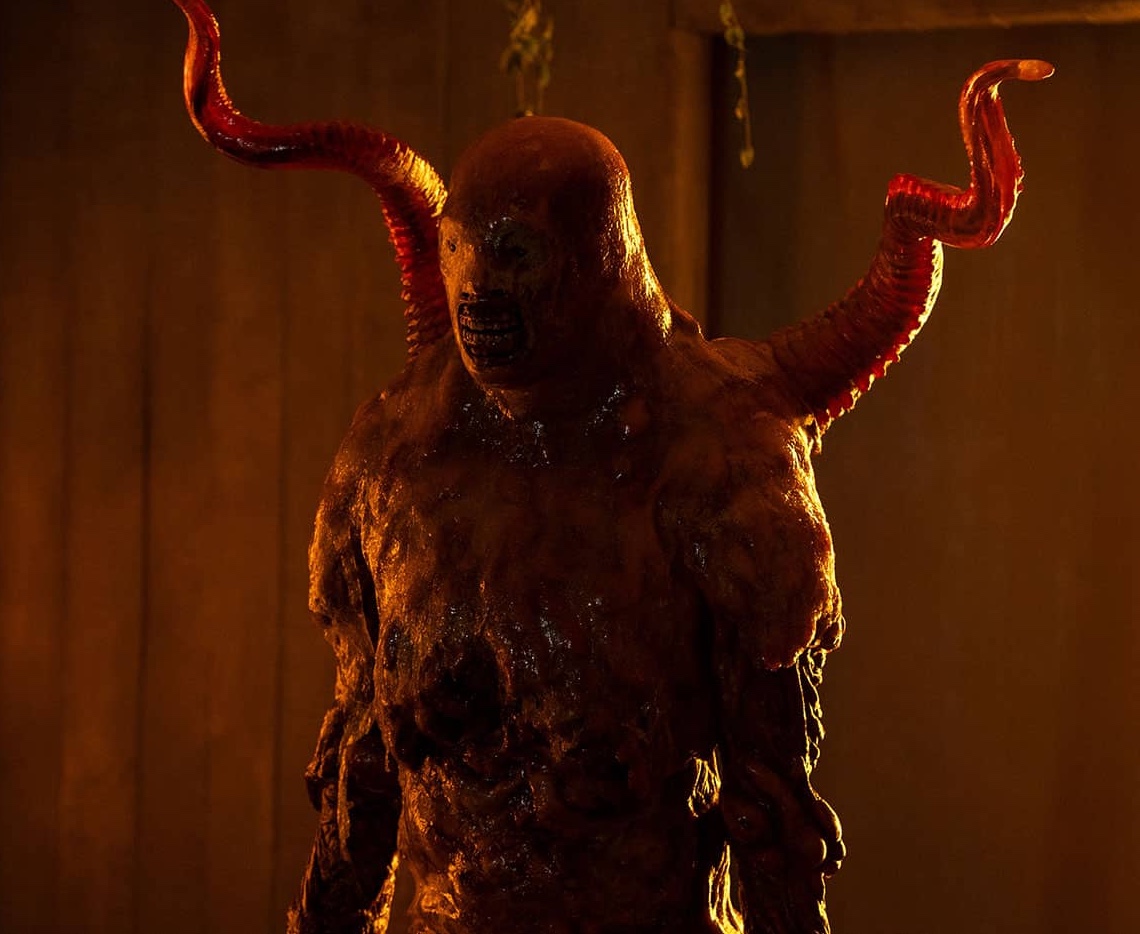 Kevin had the pleasure of working on The Viewing, the seventh episode of Guillermo del Toro's Cabinet of Curiosities directed by Panos Cosmatos (Mandy, Beyond The Black Rainbow) on Netflix. The episode shows Kevin as the character of Blob Man, a distorted version of a wealthy, eccentric man. The creature suit and mechanics were designed and realized by the extraordinary team at Spectral Motion. 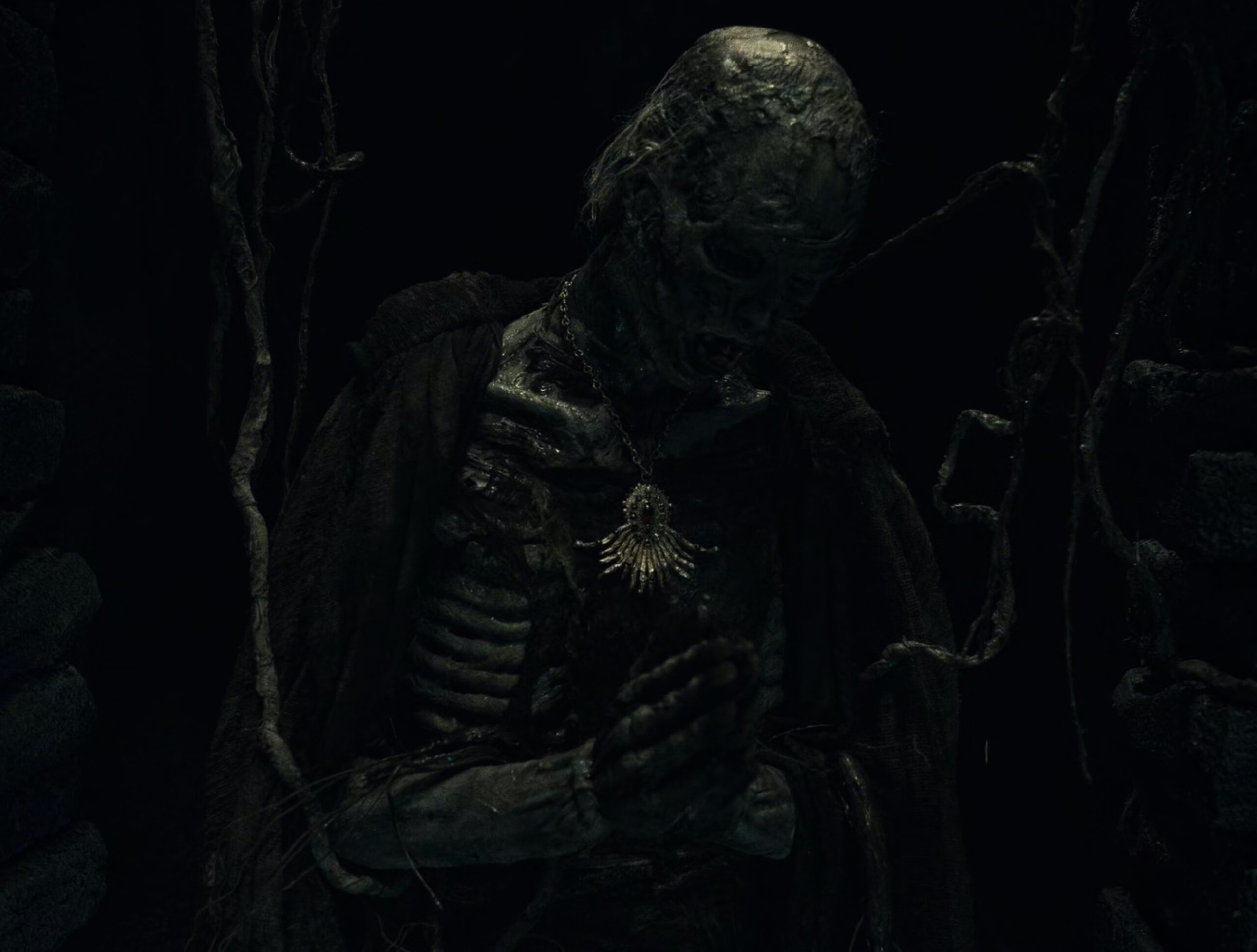 Cabinet of Curiosities, the hit horror anthology series produced by Guillermo del Toro and J. Miles Dale is now streaming on Netflix. Kevin had the pleasure of playing the Corpse in the second episode of the series, Graveyard Rats, directed by Vincenzo Natali, where he fights and chases Masson (played by David Hewlett) after he steals the Corpse's medallion. Kevin had a delightful time working with Mike Hill Creations with their design and realization of the character. 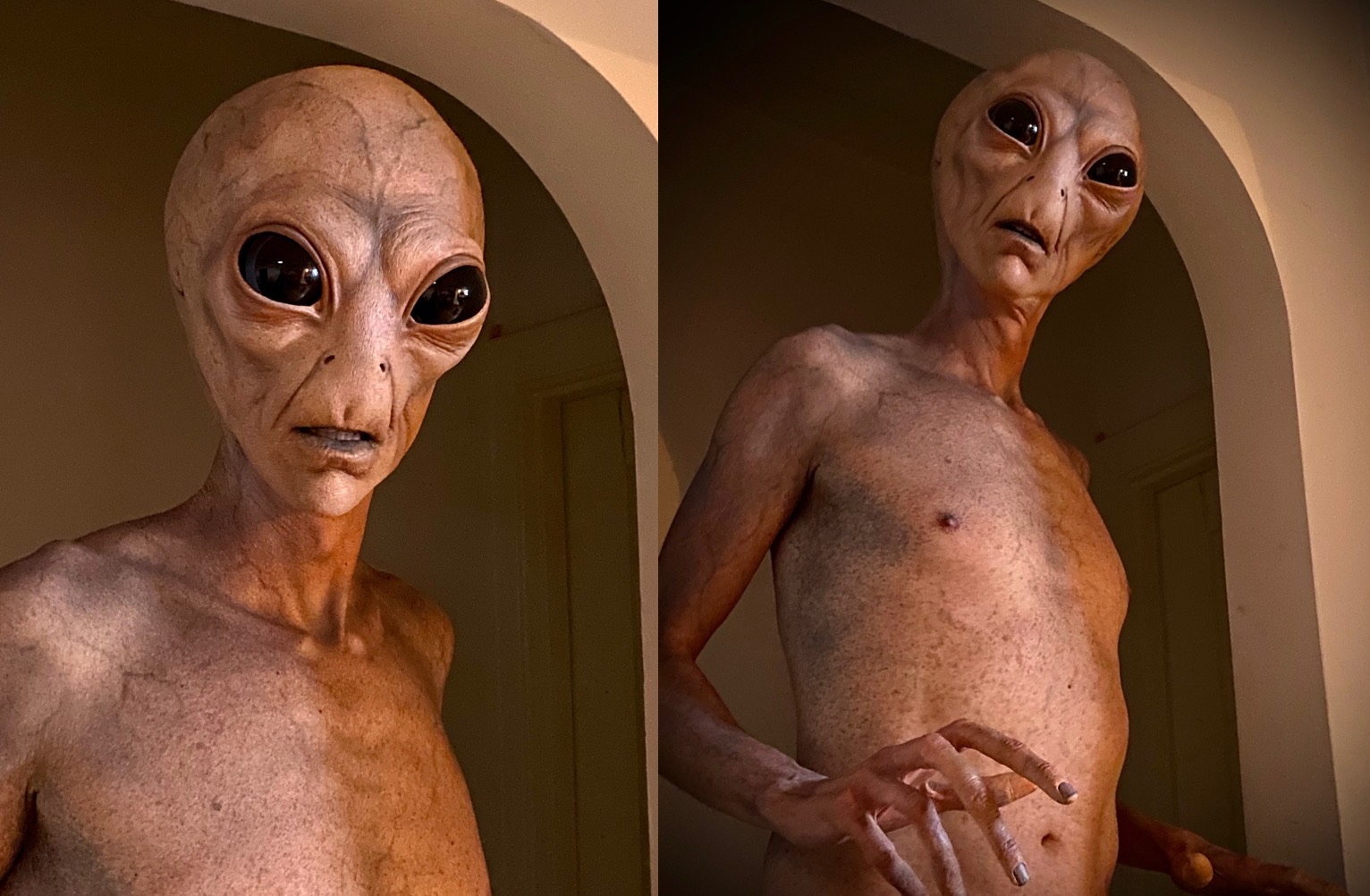 The Truth is Out There, and Possibly Inside Your House

Kevin worked on a short film and was turned into an alien by a great team of makeup artists. 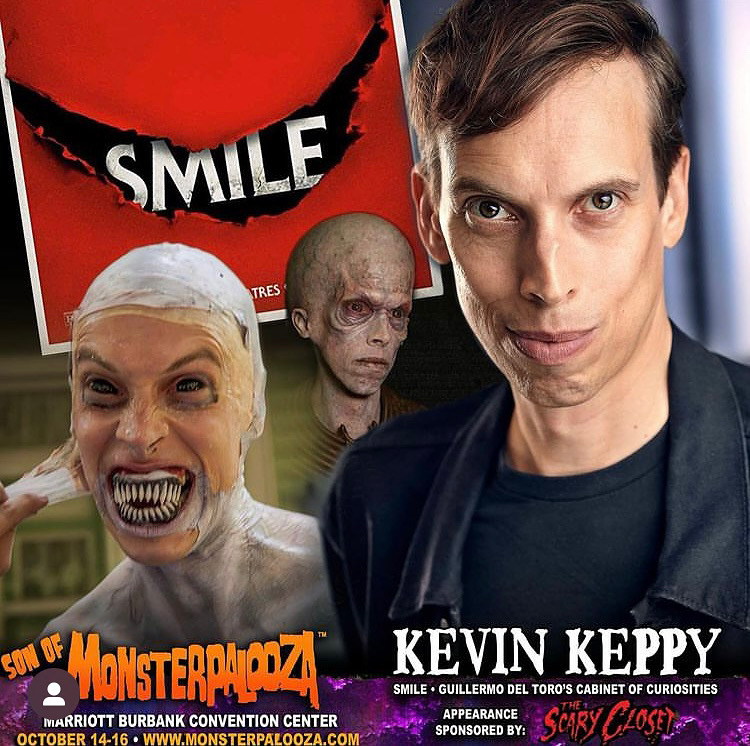 Appearance at Son of Monsterpalooza

Come see Kevin and amazing artists of horror at Son of Monsterpalooza in Burbank, CA on October 14–16. Stop by The Scary Closet room and say hi where he will be signing on Friday from 8–10 pm and Sunday from 12–3 pm; then on Saturday Ana Victoria Esquivel will transform Kevin into Reverend Henry Kane from Poltergeist 2.

Get tickets and more information at the Son of Monsterpalooza website. 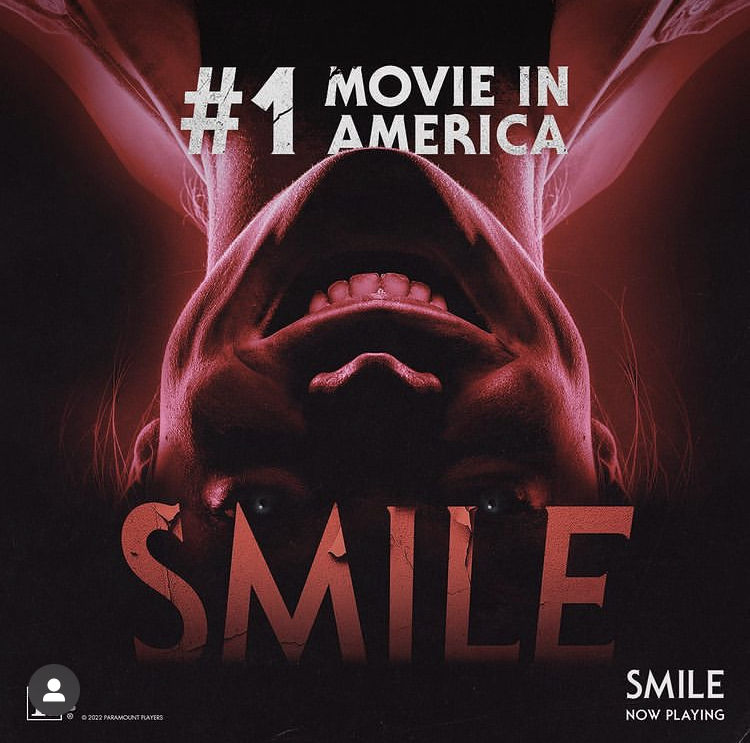 Smile Is the #1 Movie in America

The critically acclaimed horror movie from Paramount Pictures, Smile, is the #1 movie in the USA after its opening weekend drew in $22.6 million from movie goers.

See Smile, only in theaters. 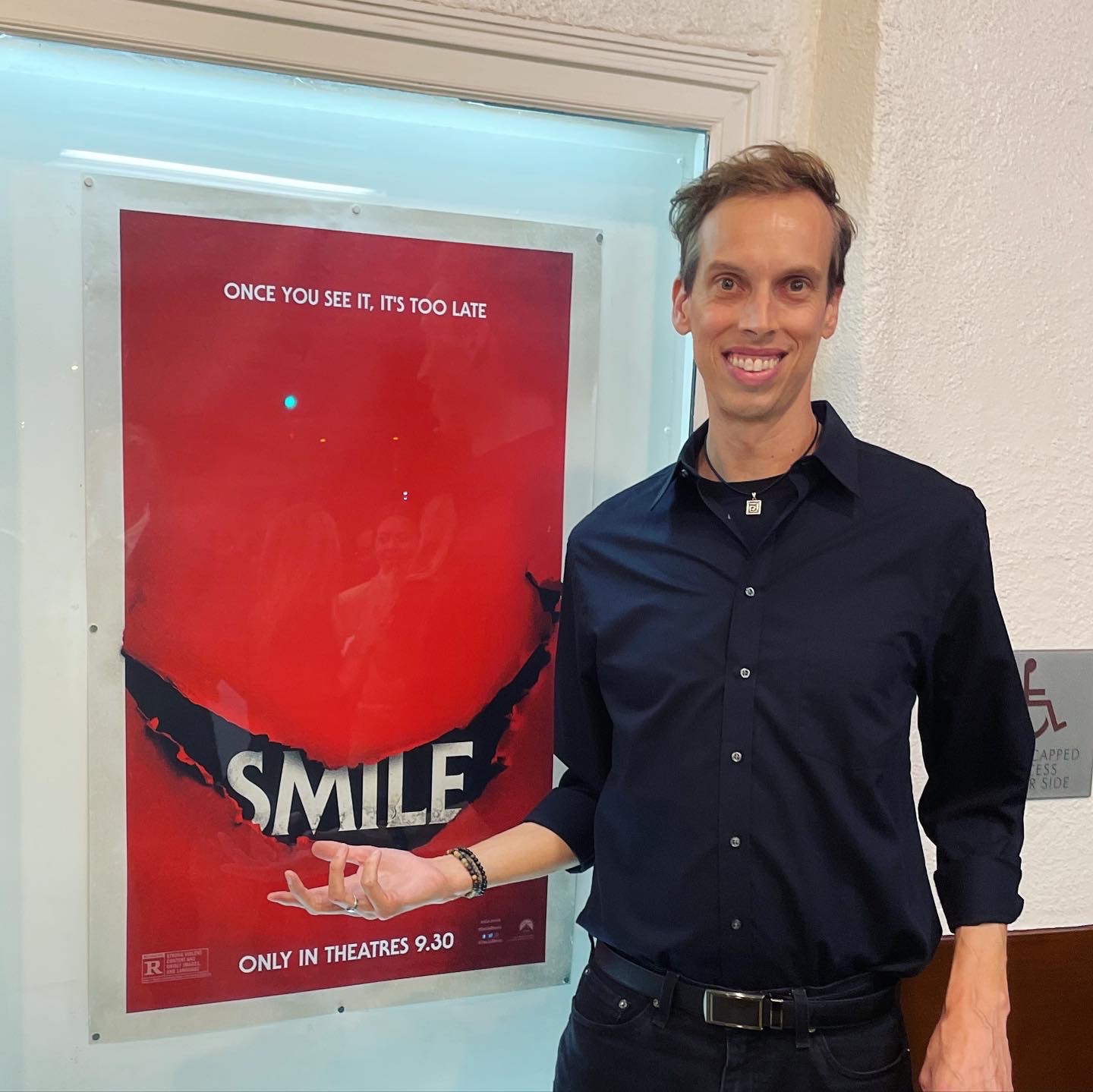 The much anticipated horror movie of the season, Smile, has been released worldwide from Paramount Pictures. The horror movie, directed and written by Parker Finn and starring Sosie Bacon, has received critical acclaim and rave reviews.

Movie goers will see Kevin in an unforgettable role that is sure to leave them shocked and taken aback. Kevin had the great opportunity to work with Amalgamated Dynamics, Inc. (ADI) to be transformed into character seen on screen.

See Smile now, only in theaters. 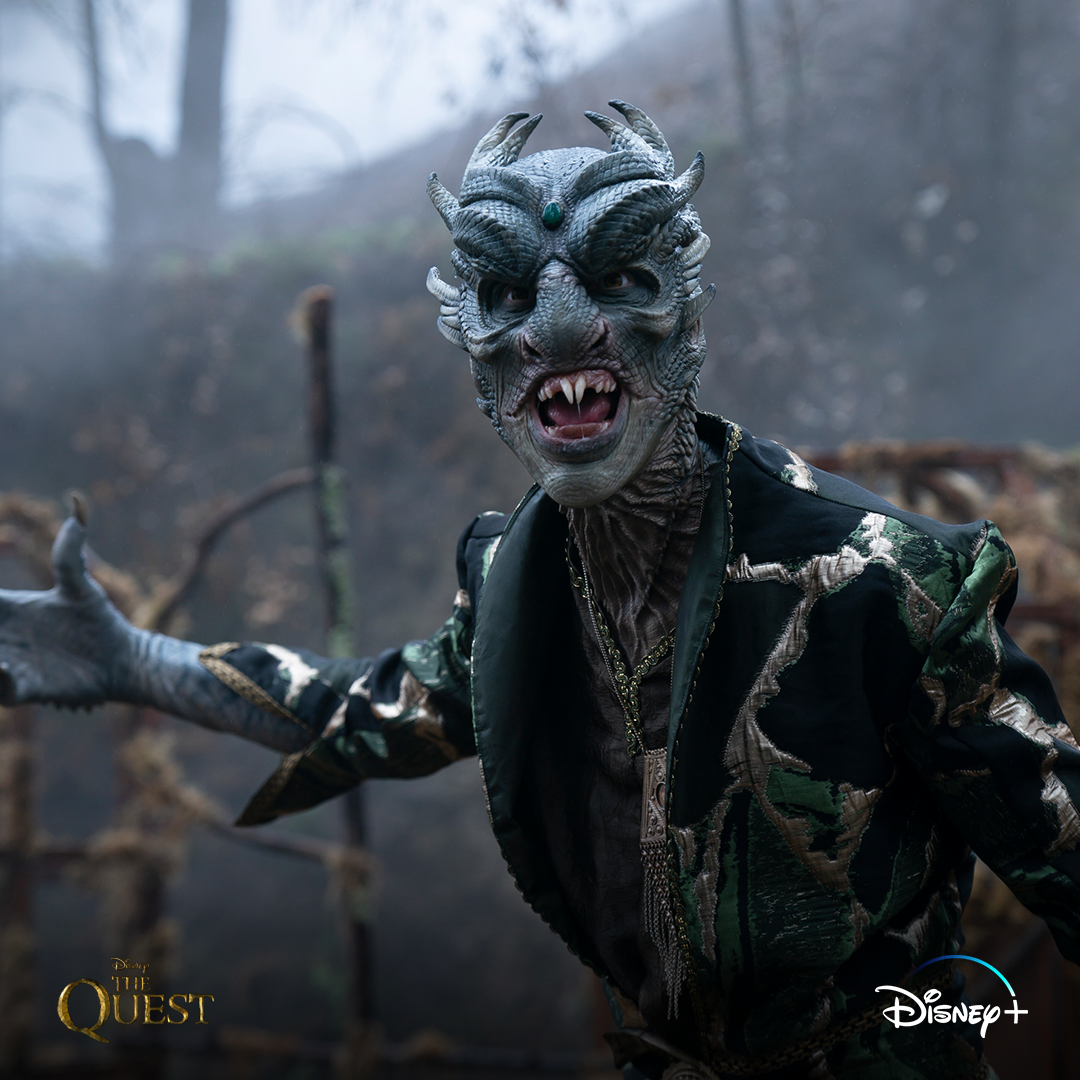 Behold the Serpent King in Disney+'s The Quest

Kevin had the wonderful opportunity to perform as the Serpent of the Sorrian Dunes, one of the mystical denizens in the fantasy reality show The Quest, and work with Spectral Motion whose amazing team of artists realized the creation of the character. 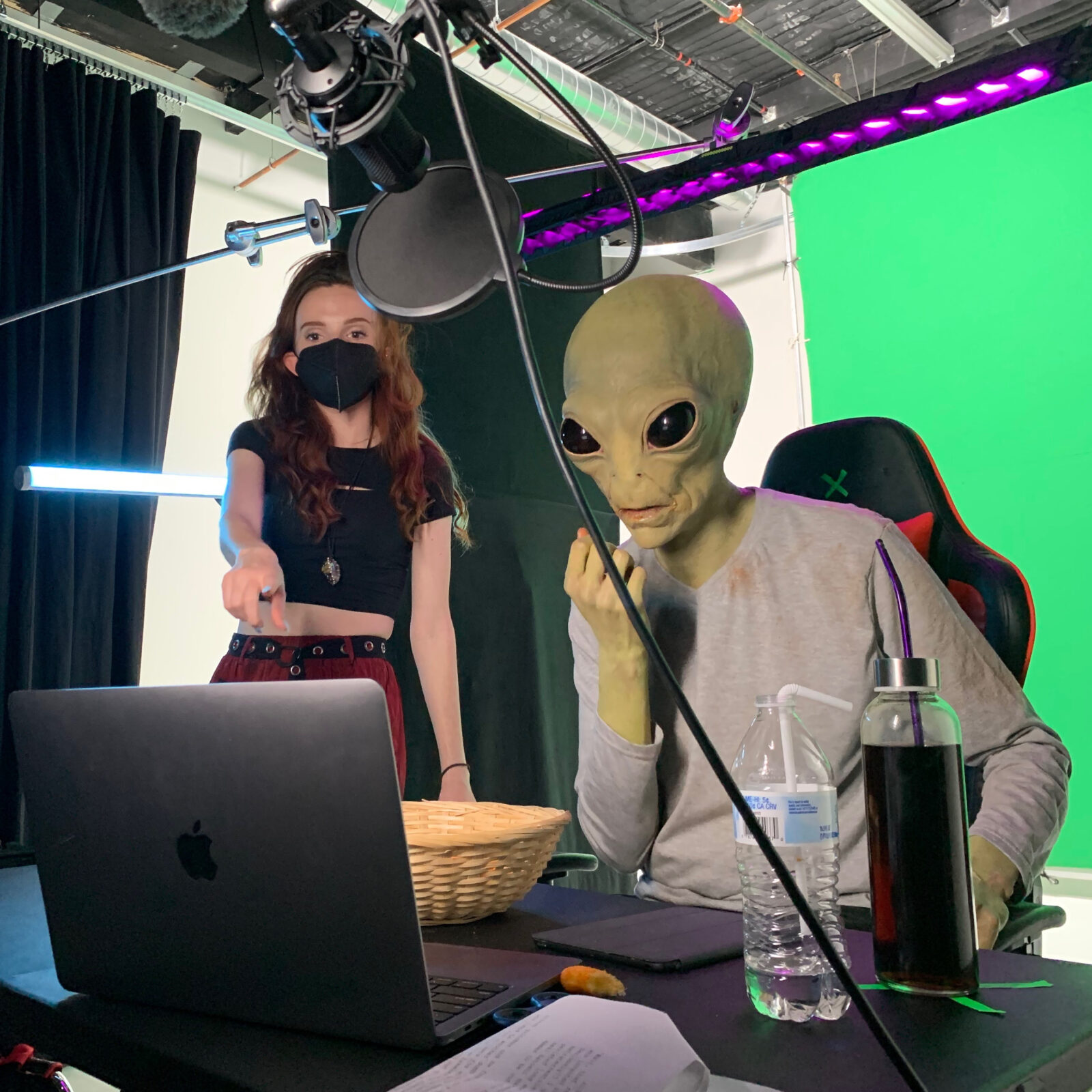 Bitcoin's Going to the Moon, Bro

A look behind the scenes of a fun commercial that Kevin did for the Bitcoin 2022 conference in Miami, Florida. Some remarkable and wonderful people to work with on this one, like director Kyra Gardner pictured here. 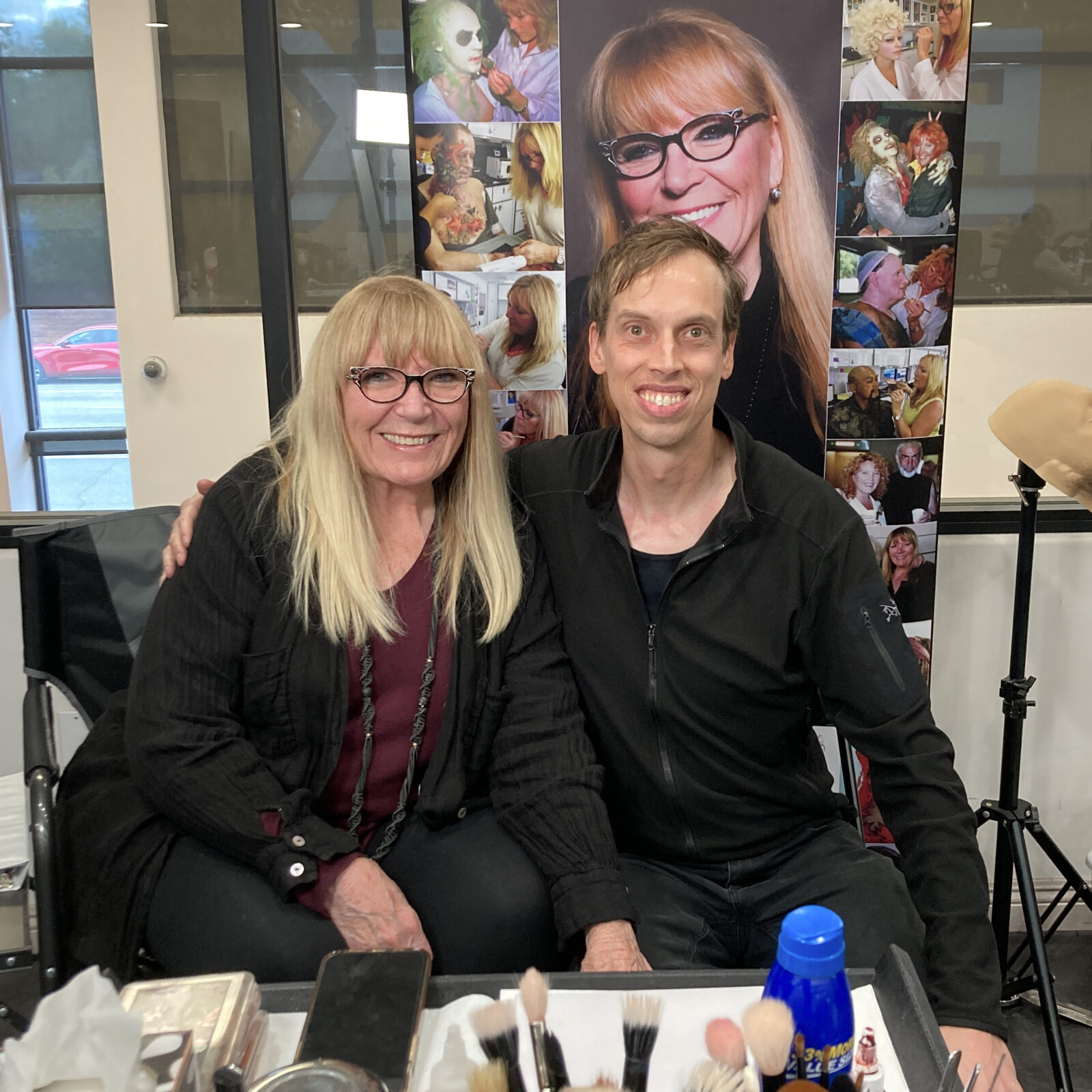 Kevin had the opportunity to meet the remarkable and wonderful person and artist, Ve Neill. He has had the delightful privilege of modeling at Legends Makeup Academy in Los Angeles and to see Ve's incredible (and always very fun) instruction and imaginative makeup creations by her students. 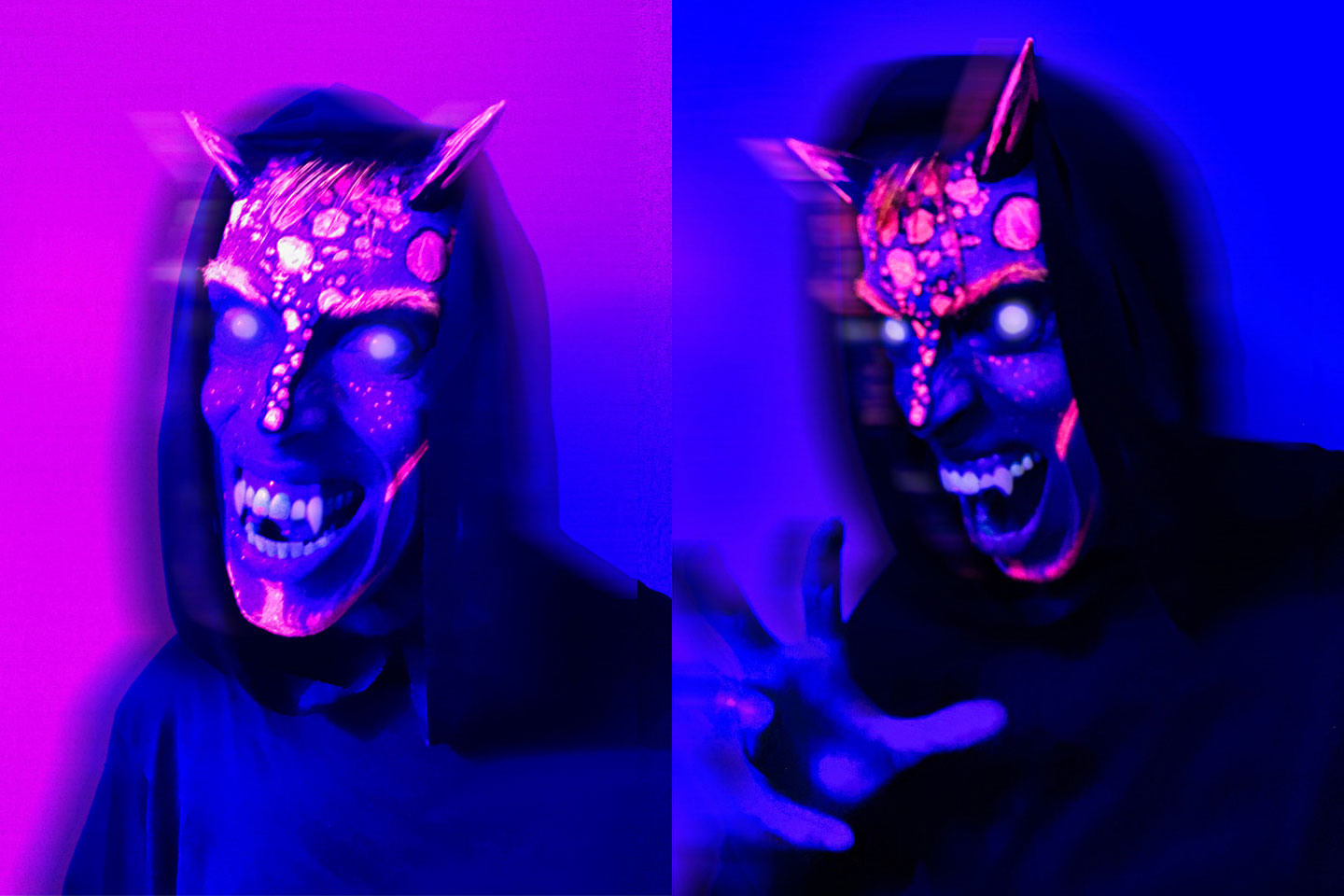 In the dark corners of the night lurks the neon demon in the black light. Kevin worked with Ana in this project that used Kryolan neon paints that activated strongly in black light and resulted in something unexpectedly colorful and unworldly. 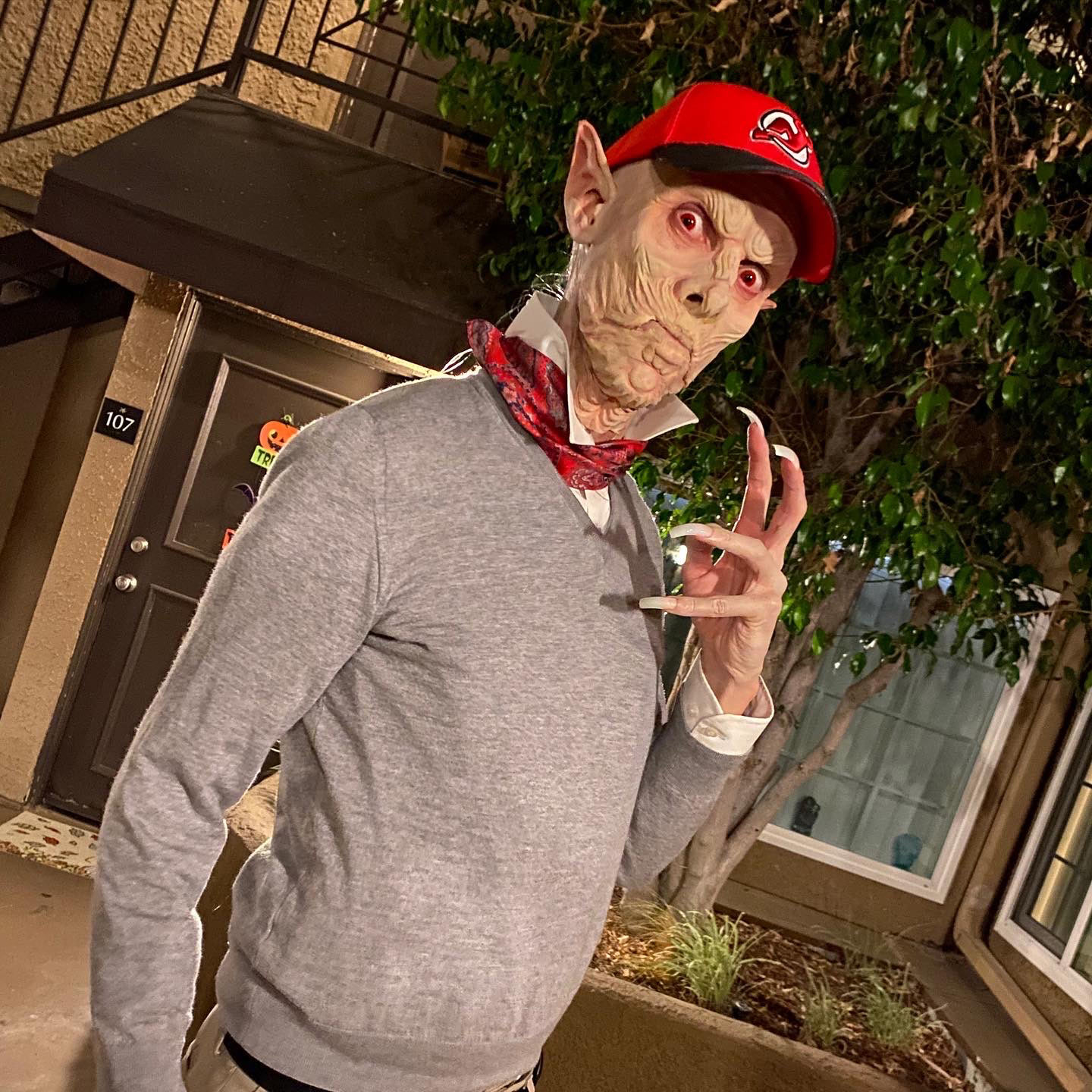 Halloween Fun with What We Do In The Shadows Costume

Halloween was very different in 2020 with the pandemic in effect and the holiday essentially being canceled. Regardless of the situation and determined to have a thrilling evening, Kevin dressed and performed as Baron Afanas—originally played by Doug Jones—from the television show, What We Do In The Shadows. The makeup and foam latex appliance was sculpted from Kevin's lifecast by Ana Victoria Esquivel that brought success and fun to this Halloween. 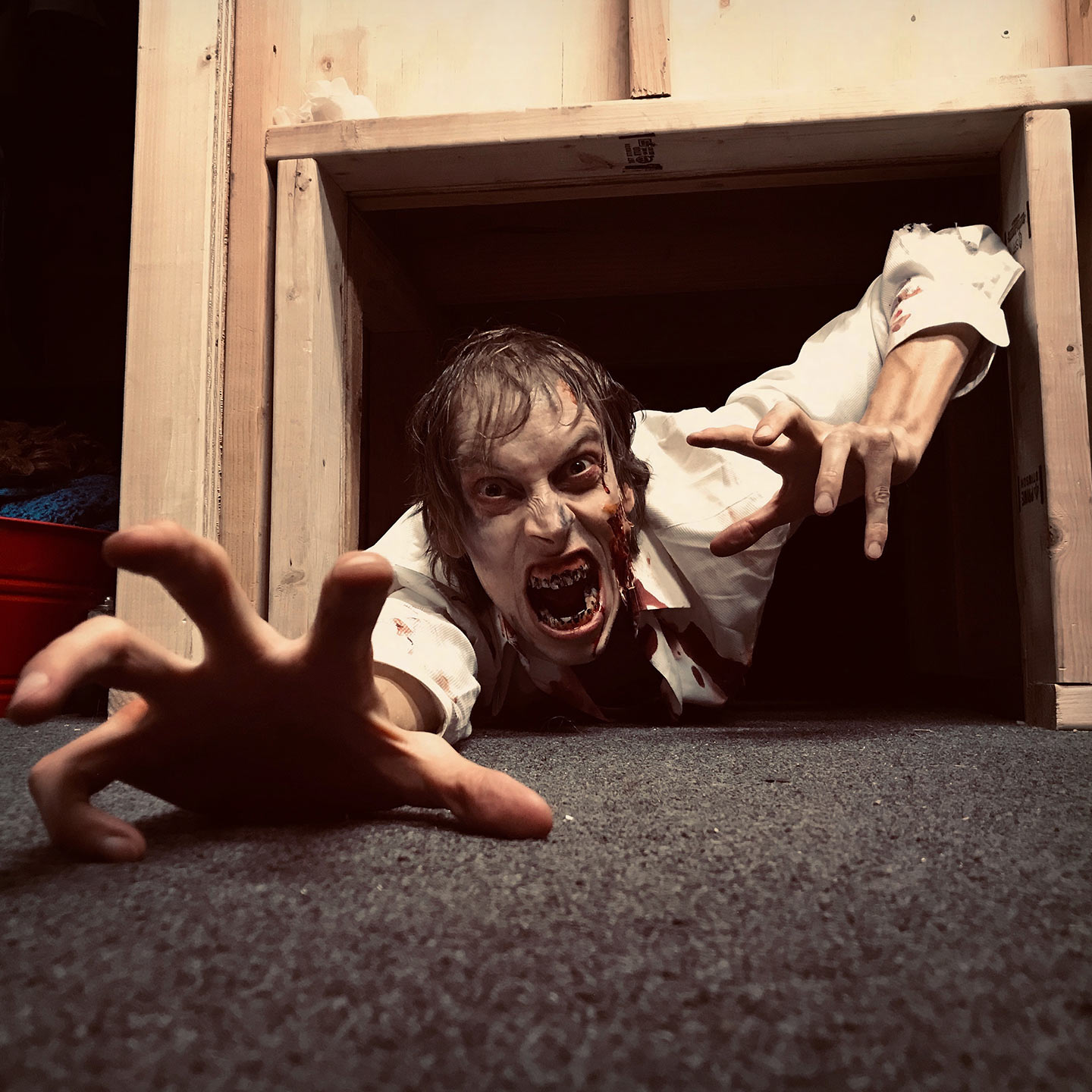 Kevin participated in the film, Streets Of The Dead (currently in production), as a warehouse zombie with an endless appetite. Directed by Robbie Dias. 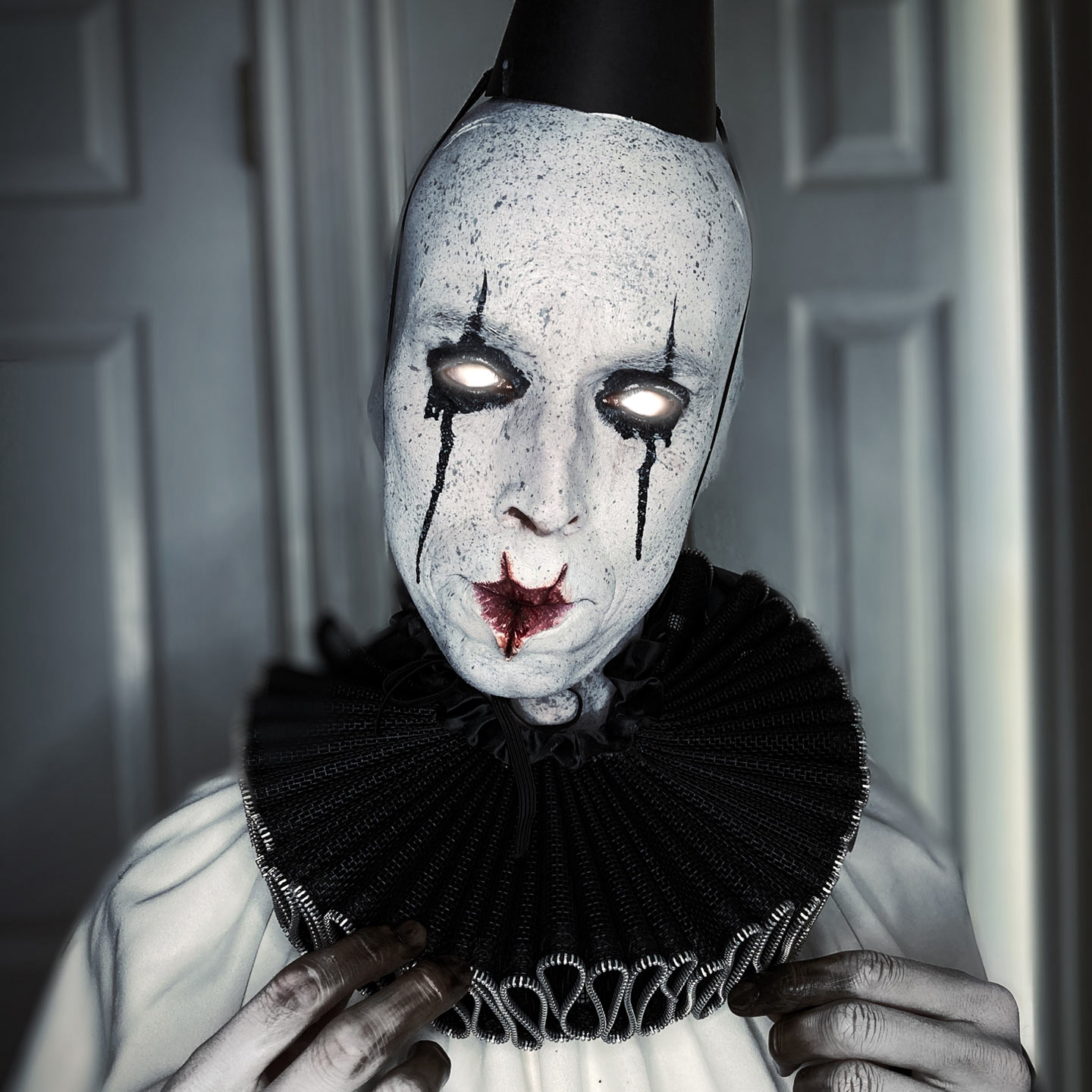 Kevin sat in the chair for Ana Victoria Esquivel in an original character concept using a lip prosthetic from DYAD. (Eyes digitally altered) 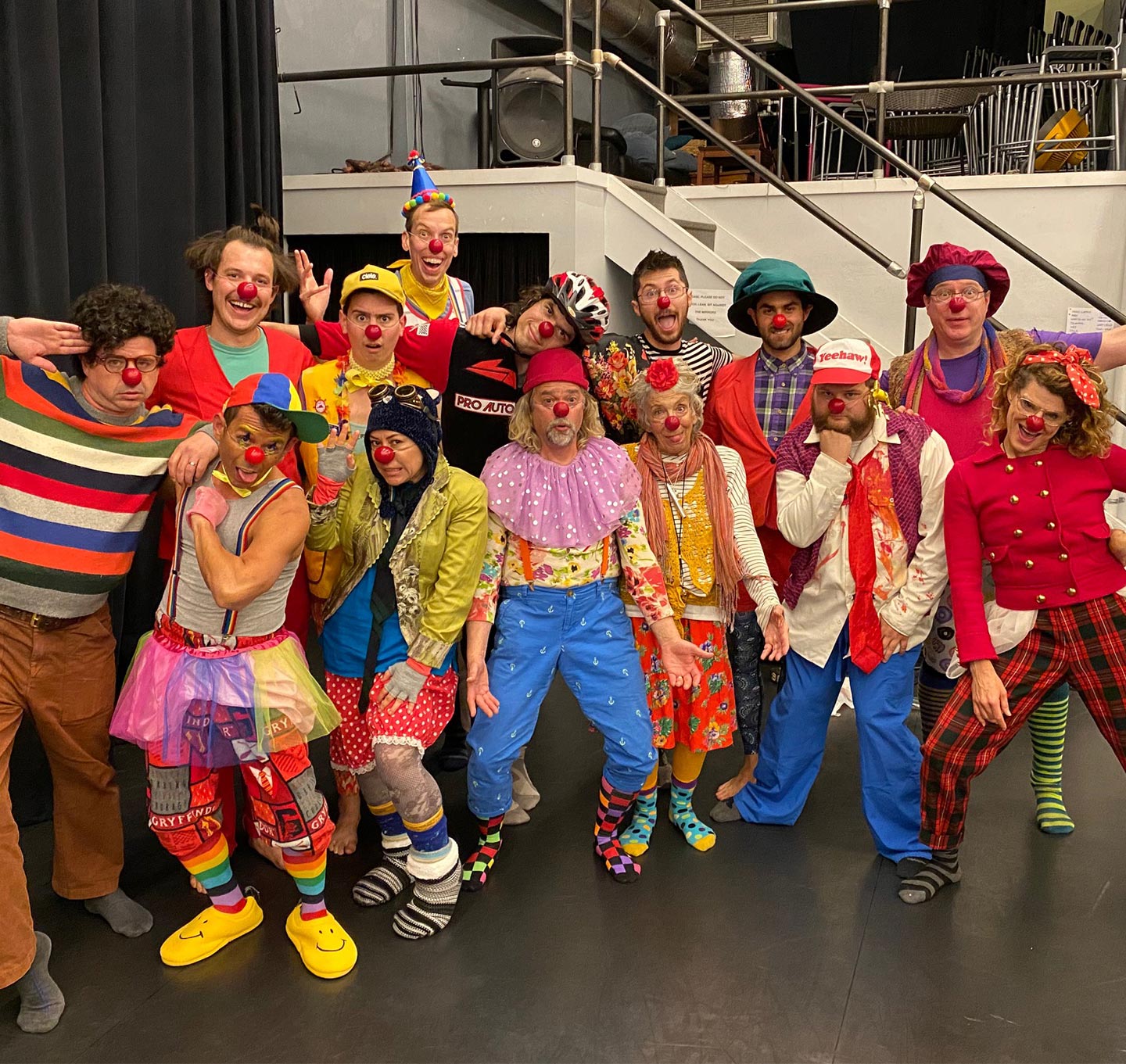 Graduation at The Clown School

Kevin graduated (passing all three levels) from The Clown School in an evening that culminated in a show performance with individual and group clown acts, and well, it was quite fun! The audience laughed and screamed! Clowning is an honest way of being, thinking, feeling, of tapping into instinct, embracing failure, and expressing yourself unapologetically. Once started, the journey of the clown is never ending and always rewarding. 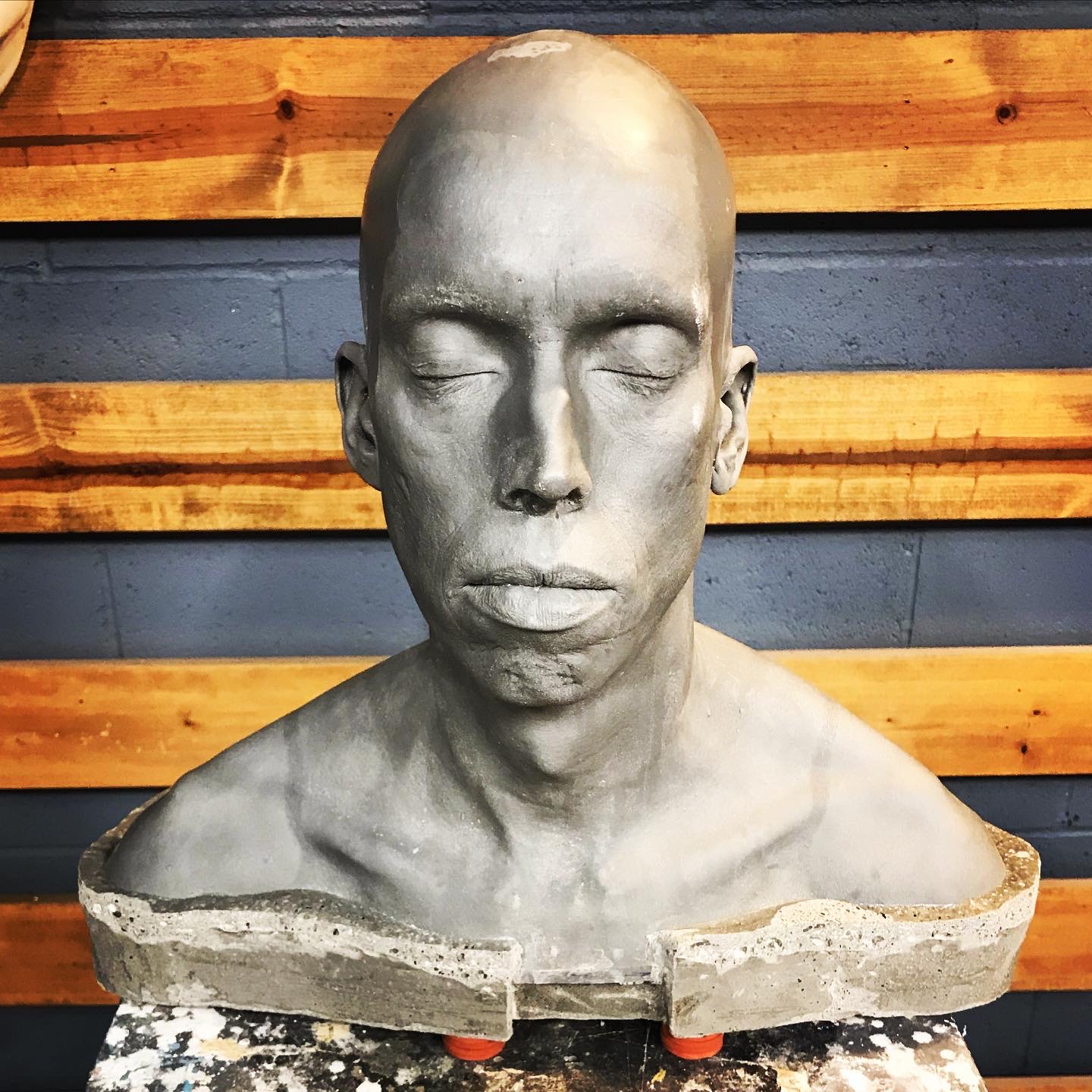 New Lifecast for Creatures and Monsters

Kevin sat in the chair for a lifecast with Jordu Schell (the base for the creation of customized creature and monster prosthetics and masks). As seen in the picture, resin was poured into the silicone mold to reveal a great-looking positive master. Kevin has this lifecast available for new projects and productions. 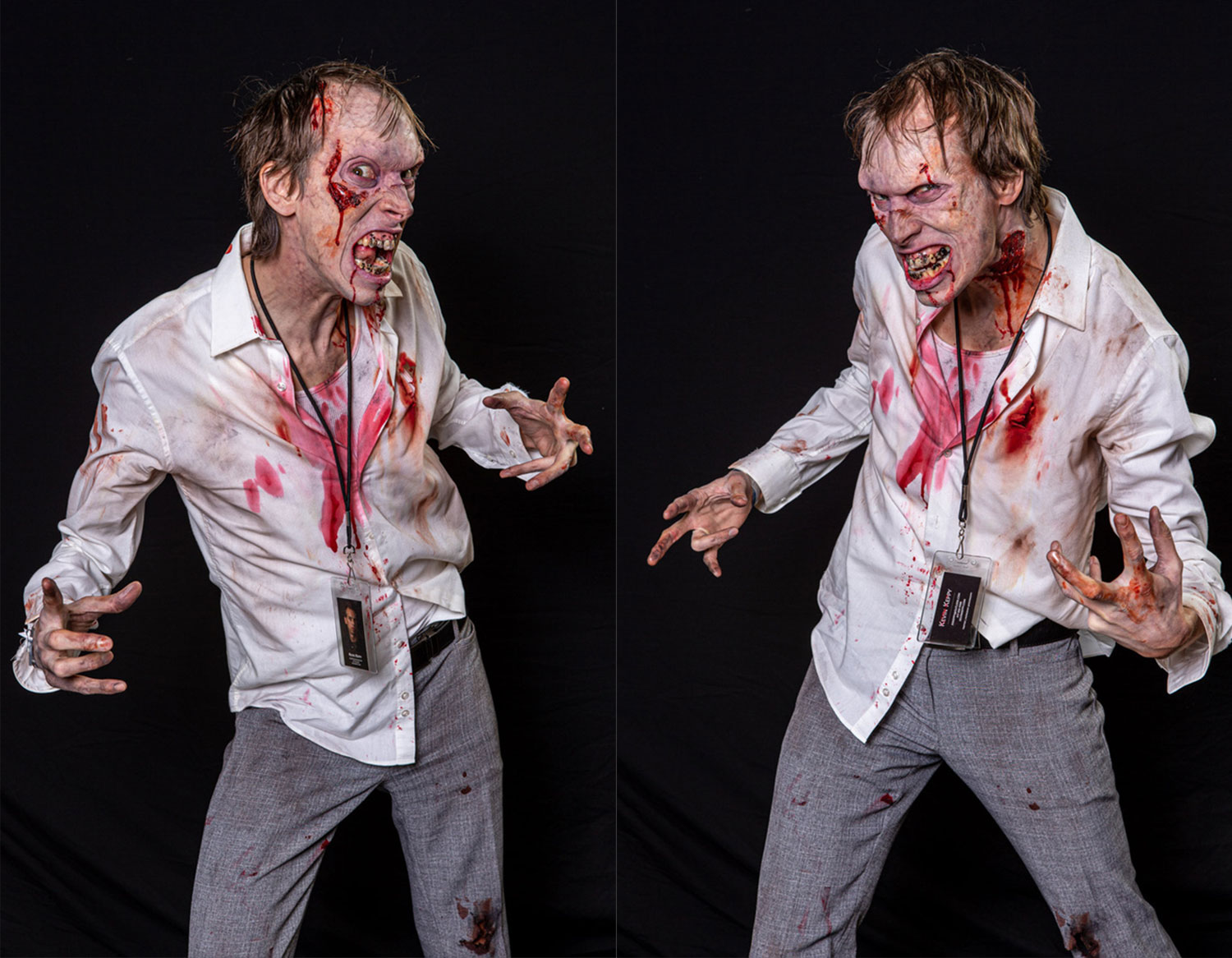 "They're Coming To Get You, Barbara" with a Zombie Makeup at IMATS

Kevin worked with SFX makeup artist Ana Victoria Esquivel on a fun zombie creation shown and performed at IMATS 2020 in Pasadena, CA. Staying in character throughout the event, Kevin took many photos and videos with smiling, happy, and mostly fearless people. 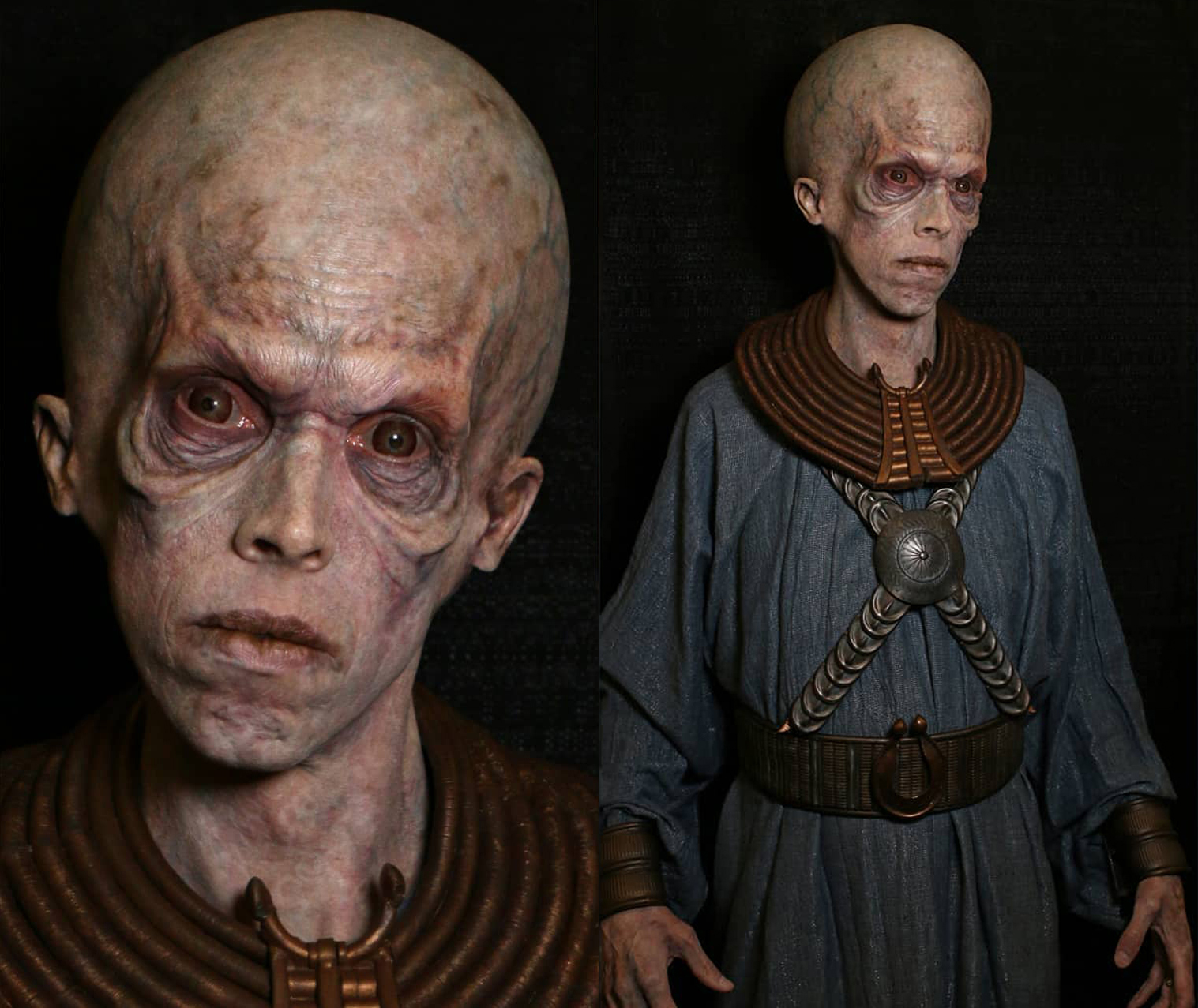 Kevin sat in the chair for SFX makeup artist Jacquelyn Coon (assisted by Sidney Cumbie) at the Bdellium booth at Son of Monsterpalooza to create the character, Ancient Alien Oracle. 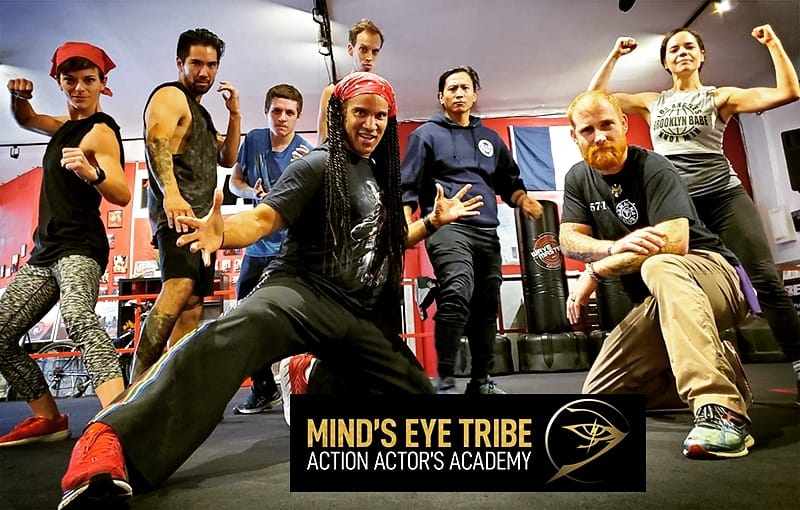 Motion Capture and Action Classes with The Mind's Eye Tribe

Kevin recently attended classes with The Mind's Eye Tribe Action Actor's Academy founded by TJ Storm, a man of many roles on screen and in motion capture. Kevin participated in the full-day intensive class, Introduction To Motion Capture, followed by Performance Capture Bootcamp—two incredible classes that gear actors toward working in the world of motion capture.

Following, Kevin attended the Action 101: Stunt Fighting Basics that offered information and hands-on training of stunt combat in front of the camera.

Kevin looks to pursue more classes with The Mind's Eye Tribe. More information about the academy can be found at https://mindseyetribe.com. 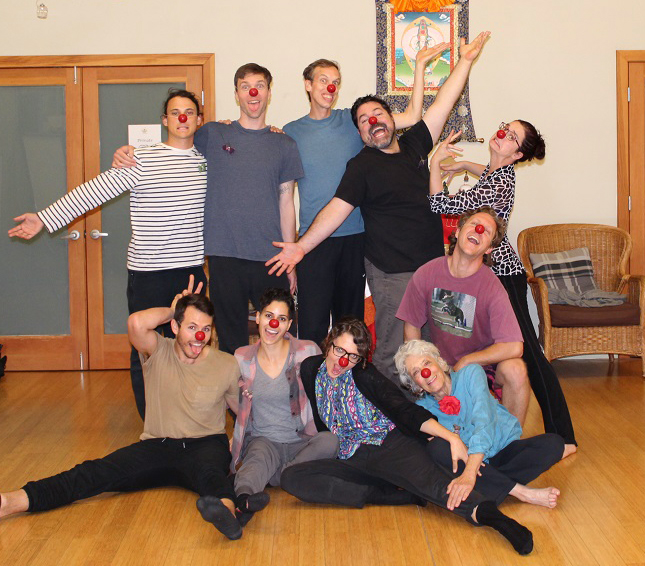 Clown Training at The Clown School

With the strong desire to train and learn more about the clown, Kevin searched for a good school in LA and instead found a great one: The Clown School. Vulernability, trust, listening, seeking pleasure, and being emotionally connected are a few of the principals of clowning, all of which also relates into acting and daily life.

More information about The Clown School can be found at https://theclownschool.com. 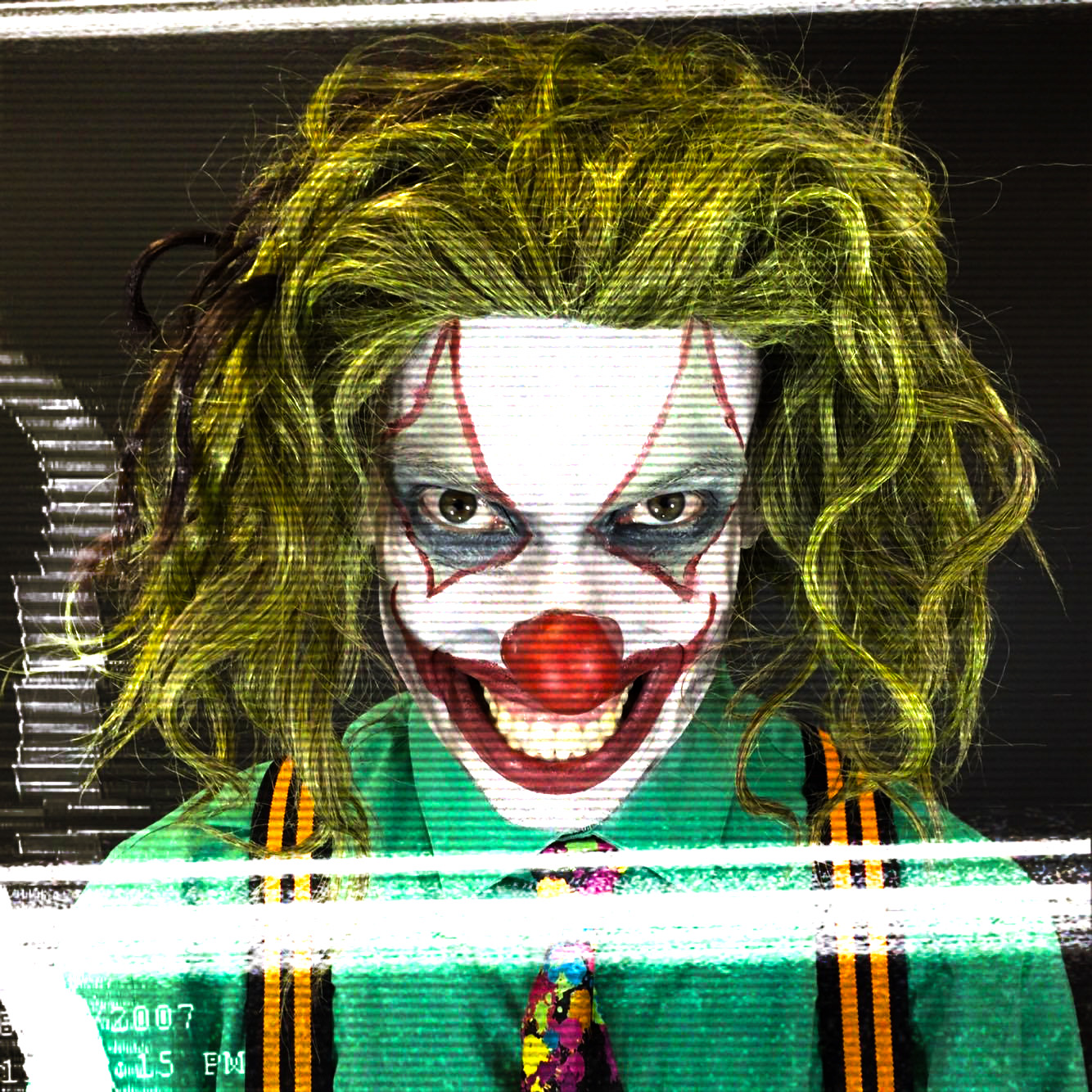 Kevin lent his voice for the horror podcast, Necrologist News Network, in its premiere episode, The Kid Who Kried Klown. Kevin portrays the character, Kilbob the Klown, a children's television show host who aims to teach naughty children valuable lessons.

The podcast can be heard on iTunes, GooglePlay Music, Spotify, Podcasts.com, Stitcher Radio, and TuneIn. 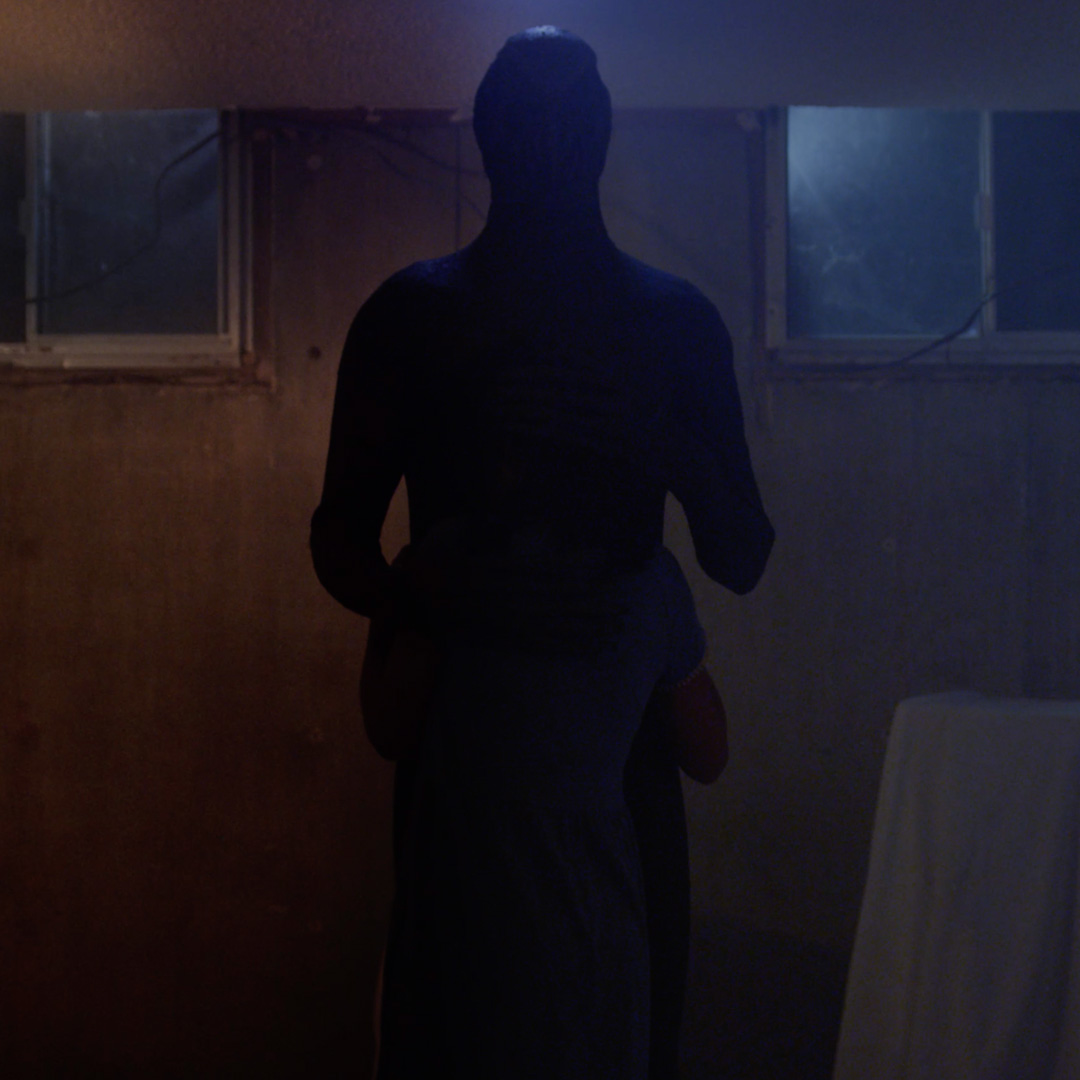 There's More To Fear In The Basement

Jenny Goes Into The Basement is an upcoming short horror film soon to debut in select festivals around the country. Kevin portrayed the character, Basement Creature, in this story about the personal anguish that a lonely child can feel in her home.

More information about the film can found on IMDb. 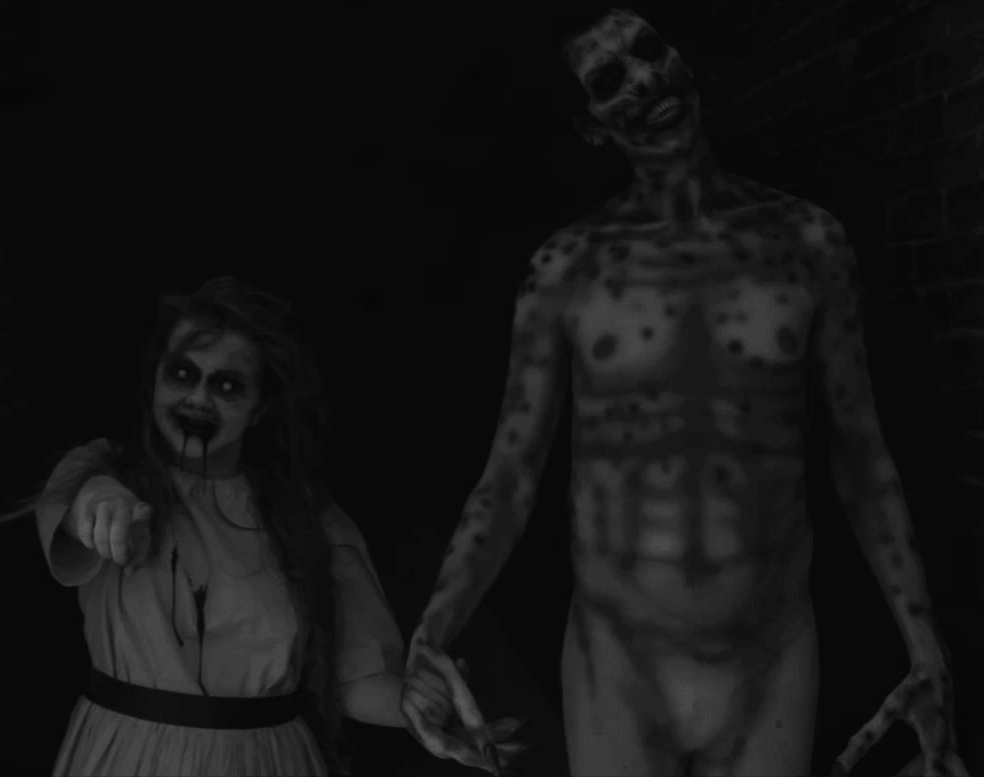 Introducing Shadow Bound, a 90-minute black-and-white silent horror web series that is available to watch on YouTube. Kevin is executive producer of the series and plays the creature character, The Hollow One.

Shadow Bound won 5 awards and received 6 nominations in web festivals around the world. Kevin won the award of Best Character for his role as The Hollow One at Bilbao Web Fest in 2015.

About: Famed horror writer, Jack Pickman, returns home after the strange death of his father. Jack discovers evidence that his father’s last case may have been to blame for his death. He sets out to uncover the truth and finds himself in a race to save the world from an ancient evil lying within the shadows. 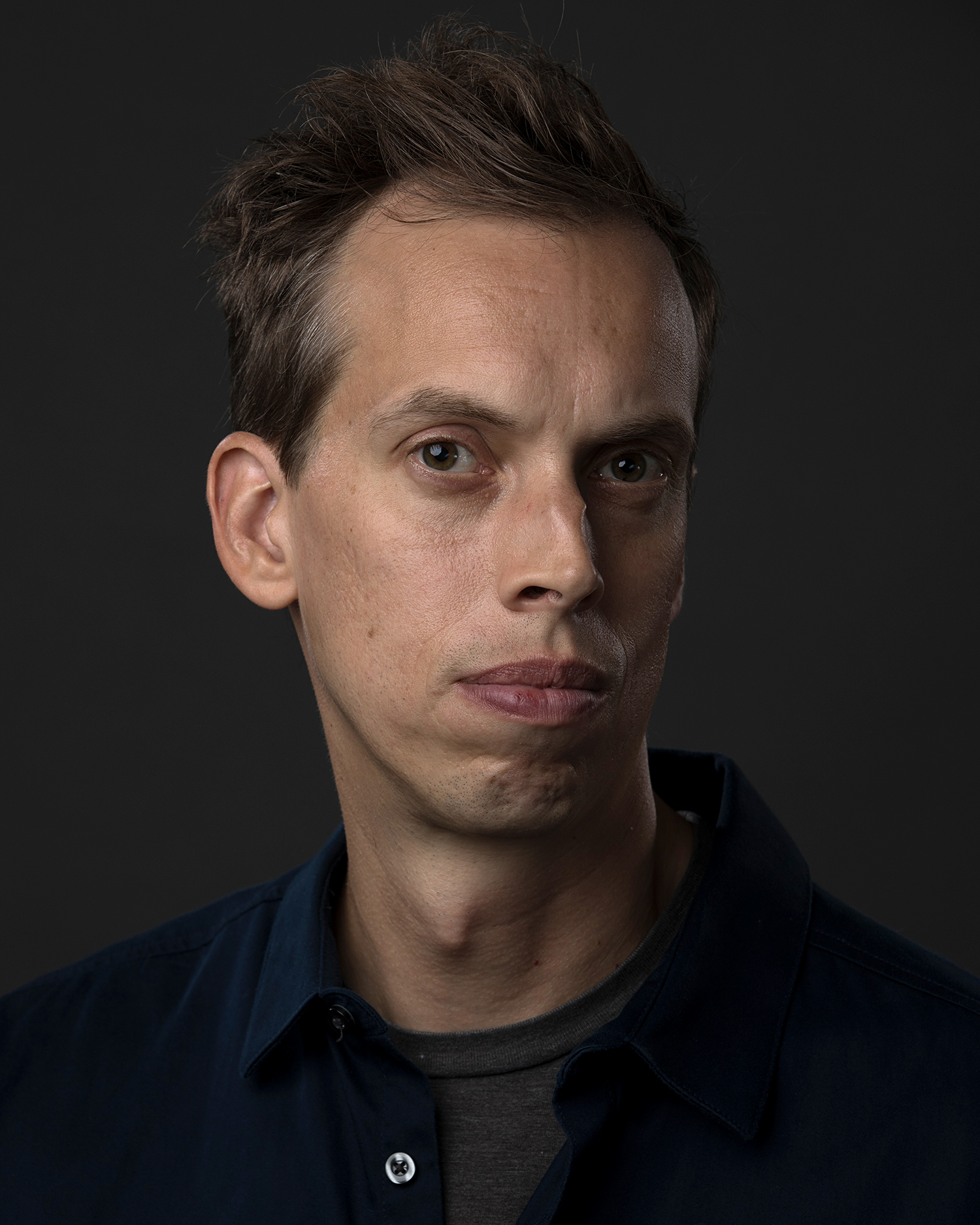 Kevin sat down for a photoshoot with photographer, Chuck Travers, for a series of photos that produced a collection of headshots and body shots.

You can view Chuck's portrait and rural landscape photography at Chucktravers.com.